The organ-on-a-chip technology pursues ambitious goals: accelerating drug development and reducing animal testing. The working group of Prof. Peter Loskill at the Fraunhofer Institute for Interfacial Engineering and Biotechnology IGB and the University of Tübingen is an organ-on-a-chip pioneer within Europe. This technology now covers a wide spectrum, from liver and kidney to brain tissue. The research team has even created an organ-on-a-chip using cardiac muscle cells: polymer chambers the size of a postage stamp, inside of which minuscule tissue cultures are fed with nutrients via a system of microchannels. These can then be used to test the side effects of heart medications.

The team has also reproduced the retina of the eye on a chip, which had never been done before. “There’s a great deal of interest in the retina-on-a-chip in the pharmaceutical industry, as the side effects of many medications can involve the retina,” says Loskill. Model systems are rare and animal models are of limited use, as the retina of animals has a different structure to that of the human retina. Moreover, retina-on-a-chip technology will also facilitate research into diseases of the retina and the development of drugs to treat conditions such as age-related macular degeneration and diabetic retinopathy. Of even greater medical significance are chips with white adipose tissue (WAT-on-a-chip): using these, researchers hope to better understand the role that white adipose tissue plays in the body and promote more targeted therapies for associated illnesses such as diabetes. In addition, WAT-on-a-chip systems help reveal the processes by which substances are stored in adipose cells.

Loskill also expects OOC technology to open up a further field of research – gender-specific medicine. “Many diseases manifest themselves in different ways in male and female patients,” he explains. “It’s an aspect that has not yet received enough attention in medical research and drug development.” In the future, OOC systems will enable researchers to investigate male and female tissue separately.

And now that scientists have mastered the technique of placing a whole variety of tissue cultures on a chip, the next challenge will be to increase the throughput of the various substances being tested. In the future, so-called organ-on-a-disc systems will combine hundreds of human tissue samples in one handy format, thereby helping to turn this technology into a routine procedure.

For sure. We’re already seeing a big interest on the part of the pharmaceutical industry. The technology can be used right across the board: screening for new active ingredients, carrying out toxicity tests and backing up clinical studies.

Will the regulatory authorities accept organ-on-a-chip data in place of results from animal experiments?

The regulatory authorities are very open to this new technology. I’m currently working with regulatory bodies on two EU projects. These include the German Federal Institute for Drugs and Medical Devices (BfArM).

Will the technology make animal experiments completely redundant in the long term?

No technology alone will ever be able to completely replace animal experimentation. But our chips do provide a source of data that will enable us to gain requisite certainty with significantly fewer animal experiments. 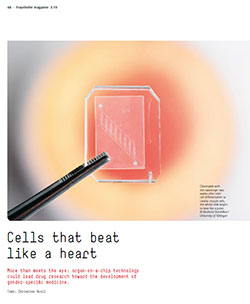