The future of the human-machine relationship in surgery

In the series "Art meets Science" we cordially invite you to a discussion evening about the complexity of art and medicine and the possible consequences for our society. Do new developments such as artificial intelligence offer opportunities and drive motivation, or do human beings progressively lose out as a result? Art and science, separated worlds at first glance, complement each other and can thus unleash innovation potential.

The performance WHOSE SCALPEL by the artist Yen Tzu Chang focuses on the future of the relationship between humans and machines in surgery. The installation is based on a 3D-printed replication of the artist's heart, equipped with light sources and electronic sound generators. Her work was created as part of the artists' residence "STEAM Imaging" at the Fraunhofer Institute for Image-Assisted Medicine MEVIS, developed by the scientists Sabrina Haase and Bianka Hofmann. Chang is the winner of the artists' residence, which was jointly hosted by Fraunhofer MEVIS and Ars Electronica as part of the European Digital Art and Science Network. This international initiative launched by Ars Electronica enables artists to spend time at renowned research institutions to link science with the approaches of digital art.

The event in the "Art meets Science" series is a contribution to the Science Year 2018 – Working Life of the Future. 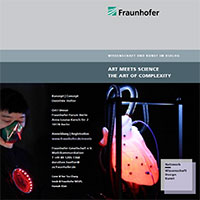 At this link you can register for the event.

Following the performance by Yen Tzu Chang, Gerfried Stocker and Horst Hahn will discuss the complexity of art and medicine and its potential impact on our society in an open debate. Our experts will also talk about the European Commission’s STARTS initiative and other opportunities that will help support collaborations between artists and R&D projects across Europe.

is a Taiwanese media artist who currently lives and studies in Linz, Austria. She has been working in various fields and combining them with art and technology, including interdisciplinary art and experimental performances based on sound installations. She holds a bachelor's degree from the new media art department of the Taipei National University of Art. Since 2014, she has been studying her master's degree at the Interface Culture department of the Kunstuniversität Linz. Until now, she has an abundant of experience to transfer ideas which relate to her memory and critical issues into artworks and has given performances and exhibited her works in many international conferences and festivals, such as Ars Electronica Festival, roBOt 08 Festival, Linux Audio Conference, ISEA, Digital Design Weekend in London and etc. In 2017,  she was participating an interdisciplinary project organized by Ars Electronica and Fraunhofer MEVIS. The residency artistic outcome has been presented at the Ars Electronica Festival 2017.

studied physics with mathematics, computer science, and physiology as minors at the University of Bayreuth, Universitée Paul Sabatier Toulouse III, and Ruprecht-Karl University Heidelberg. He authored six patents and more than 185 refereed scientific journal and conference publications in the fields of computer-assisted medicine, quantitative medical imaging, computer-aided detection and diagnosis of cancer, neuroimaging, and image-guided therapy. In 2006, he became vice president of the non-profit MeVis Research GmbH and was centrally involved in its transformation into the Fraunhofer Institute for Medical Image Computing MEVIS as of January 2009, where he acts as institute director since Oct 2012. At the age of 35, he became adjunct professor of medical visualization and four years later professor of medical imaging at Jacobs University Bremen. He is scientific coordinator of several national and European research consortia with a particular focus on computer-assisted breast care and quantitative image-based cancer analytics including digital pathology.

is a media artist and telecommunications engineer. In 1991, he founded x-space, a team formed to carry out interdisciplinary projects, which went on to produce numerous installations and performances featuring elements of interaction, robotics and telecommunications. Since 1995, Gerfried Stocker has been artistic director of Ars Electronica. In 1995–96, he headed the crew of artists and technicians that developed the Ars Electronica Center’s pioneering new exhibition strategies and set up the facility’s in-house R&D department, the Ars Electronica Futurelab. He has been chiefly responsible for conceiving and implementing the series of international exhibitions that Ars Electronica has staged since 2004, and, beginning in 2005, for the planning and thematic repositioning of the new, expanded Ars Electronica Center.

is a mathematician and active project manager of international research & industry projects at the Fraunhofer Institute for Medical Image Computing MEVIS in Bremen, Germany. Her previous research at Fraunhofer MEVIS entailed bio-physical procedures for mathematical modeling and simulation of thermal therapies as means of improving the therapies’ success. Since many years she is expanding and leading the educational offerings the Institute provides to up-and-coming young researchers—for example, the STEAM Imaging artist residency and the tool Inside Insight.

is the producer of novel sci-comm projects at Fraunhofer Institute for Medical Image Computing MEVIS. She involves people early in new scientific topics and future technology. By interactive and artistic approaches (from STEM to STEAM) she promotes the public understanding of implications of science and technology for society. For over 15 years she develops content and formats such as an artist-in-residency project, short movies, interactive exhibits, children’s University, teacher enhancement projects, family programs. Bianka Hofmann creates communication concepts which encourage people to get involved and to create their own experiences. She works as Head of Corporate Communication at Fraunhofer MEVIS.

Veronika Liebl is currently Director of Organization and Finance at the department Festival/Prix/Exhibitions of Ars Electronica. Recently, she is mainly in control of all European collaboration projects under Creative Europe, Horizon 2020 and Erasmus+ and executed in this position – together with her team – numerous EU projects both as project coordinator as well as partner.

After working as software developer and project manager for several companies, Thomas Bendig was CEO of the largest research organisation for applied IT research for more than 6 years. As research coordinator he is now coordinating the collaboration and joint strategy of the 21 Fraunhofer Institutes, which do research and development in the area of information and communication technology. Between research, industry and politics, he is initiating technology transfer into all industrial sectors.

The art of complexity

The Art of Complexity event was a prelude to a more in-depth collaboration between Fraunhofer and Ars Electronica that aims to find new ways of stimulating dialogue and working together in the future. A wealth of knowledge and experience on both sides provides a firm footing for a successful partnership.

The “Art meets Science” series of events offers researchers and artists the opportunity to initiate dialogue, network and find common ground. In applied research, a mutual exchange of information is the basis for sparking innovation, which is why a dialogue with artists who incorporate science and technology in their work can prove to be extremely fruitful. Complex scientific topics can be given a new perspective through art. Both disciplines are similar in many ways: They are characterized by a sense of curiosity and a willingness to experiment; a desire to explain context and correlations, and contribute to understanding the phenomena or giving it a physical shape and form.

“STEAM Imaging” is the pilot residency program of Fraunhofer MEVIS. STEAM stands for the connection of science, technology, and mathematics with the world of art. During her two-week stay in Bremen, Yen Tzu Chang, who specializes in experimental sound performances and creating customized electronic instruments, learned a software platform for medical imaging development (MeVisLab). Researchers employ this tool primarily to develop assistance systems to help physicians with diagnosis, therapy, and monitoring serious diseases such as cancer. As part of her residency, she developed a workshop alongside researchers in Bremen for pupils connecting digital media art with science in an innovative way – a new approach in science communication. The project connects computer-assisted medicine with STEM-education, art, and ethical discussions. The aim was to break down barriers between disciplines and explore flexible forms of learning and cooperation.

The STARTS project VERTIGO promotes the arts as impetus and catalysts for a creative conversion of science and technology knowledge into new products, services, and processes. To achieve this objective, VERTIGO is organising and funding artist residencies in R&D projects.

The artists will work in the ICT-Projects for up to 3 months and will contribute to the innovative aspects of the research undertaken within it by bringing a creative perspective through artistic practices..

Art and science are what motivate us

“Science is the intellect of the world and art is its soul.”
Maxim Gorky

In-depth dialogue is indispensable to applied research. Our work is supported by business, politics and the public, which is why we frequently align our scientific goals with the interests and needs of people and society. Fostering communication between employees is as important as the interaction between Fraunhofer and the public. The “Art meets Science” is a series of events that aims to do just that. Its goal is to promote dialogue between creativity and science. These artistic and in-depth discussions on ideas, questions or overarching topics often lead to new perspectives and fascinating results. It’s an experience that unites researchers and artists alike.