Lupines can constitute an important nutritional element of the human diet. Scientists have found a way to process lupine seeds so they can be turned into protein-rich, flavor-neutral ingredients for foods. For their work on this, Fraunhofer scientists Stephanie Mittermaier and Peter Eisner and Prolupin GmbH’s Katrin Petersen have today been nominated for the German Future Prize 2014 ("Deutscher Zukunftspreis").

Around the world, there is little scope to increase the amount of land under cultivation – which leaves foods, animal feed and, more recently, energy crops competing for the available space. If the world’s growing population is still to have enough to eat in the future, we need to reduce the amount of meat we consume and turn increasingly to plant-derived foods. Why? Because it takes around five times as much land to produce animal protein as it does to cultivate plant protein.

Successfully making this transition calls for plant-derived foods with a similar taste and texture to conventional animal-based products to be almost or even completely indistinguishable. But until now, hardly any such products have reached the market. While protein powders made from rapeseed, soybeans, peas and potatoes are already being used to replace milk and eggs in some foods, they often taste of beans or are slightly bitter, which can reduce Consumer acceptance.

This spurred researchers at the Fraunhofer Institute for Process Engineering and Packag- ing IVV in Freising near Munich to go searching for alternatives. They focused their research on the blue sweet lupine, a plant that is rich in protein and that has the added advantages of flourishing on German soil and naturally improving soil quality with its nitrogen-binding roots. Food production uses special varieties that contain only traces of alkaloids (≤ 0.02%), the toxic substances responsible for the bitter taste. Native garden species of lupine are not fit for consumption due to alkaloid contents of up to 4%.

Scientists at the IVV developed new processes for extracting proteins and fiber from the blue sweet lupine for use in human nutrition. They were particularly keen to improve the taste of lupine products, and in this regard food technologist Dr. Stephanie Mittermaier achieved a real breakthrough when she identified the chemical compounds that give rise to unpleasant flavors in lupines. “On the basis of this knowledge, we were then able to develop processes for removing these unwanted substances from the products,” she explained.

How do you obtain flavor-neutral proteins from lupines? First, the seeds are shelled and processed into very thin flakes. Then they are de-oiled using supercritical CO2, which behaves like a liquid at pressures above 74 bar and temperatures above 31 degrees Celsius. The majority of oils and their accompanying substances dissolve in the CO2 without leading to fat oxidation products that taste rancid or like grass. Several aqueous extraction steps then follow to remove water-soluble bitter compounds and any other undesirable flavors. Only once these stages are complete do the scientists isolate the proteins. These high-purity proteins can be used to make more than just milk, cheese, ice cream and pudding. They are also an ideal base for cakes, mayonnaise, sausage products, creams and froths. This makes lupines excellent all-purpose plants that are suitable for flexible use in all kinds of different foods, especially vegan or vegetarian products.

“Using lupine proteins in place of milk proteins enables us to make tasty vegetable milk, yogurt and cream cheese products that not only taste similar to conventional dairy products but also have the same mouthfeel,” explains Dr.-Ing. habil. Peter Eisner from Fraunhofer IVV.

The process has now reached industrial maturity, and Dipl.-Ing. agr. Katrin Petersen is implementing it in practice. She is the CEO of Prolupin GmbH, a Fraunhofer IVV spin-off that manufactures and markets food ingredients made from lupine seeds.

For the work they have done on the subject, Stephanie Mittermaier, Peter Eisner and Katrin Petersen have been nominated for the German Future Prize 2014, the German president’s award for technology and innovation. This year a total of three German research and development projects have been nominated for the award, which is worth 250,000 euros. President Joachim Gauck will be presenting the award at a ceremony to be held in Berlin on November 19, 2014. The event will be streamed live from 6 p.m. onwards and can also be watched from 10.15 p.m. on the German ZDF television channel.

For more information on the German Future Prize visit: 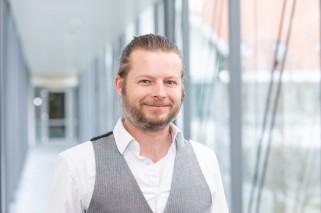