Photovoltaic elements are usually found on rooftops – after all, that’s where solar irradiation is highest. However, as researchers at the Fraunhofer Center for Silicon Photovoltaics CSP have discovered, PV elements on facades can be a useful way to supplement the power supply. If appropriately designed, they can be attractively integrated and deliver 50 percent more energy than existing types of wall-mounted PV elements. Even concrete walls are suitable.

Photovoltaic elements belong on the roof – after all, that’s where they get the most sunlight. But that’s only partly true: it makes sense to additionally install PV elements on facades. For one thing, they make use of otherwise unused space, and for another, the energy they collect can usefully supplement the power supply. Currently, however, little advantage is taken of this opportunity, as the sun usually shines on facades at an unfavorable angle, and the elements themselves tend not to be aesthetically appealing.

In their SOLAR.shell project, researchers at the Fraunhofer Center for Silicon Photovoltaics CSP in Halle showed – together with architects at the Leipzig University of Applied Sciences (HTWK Leipzig) – that this is anything but a deal breaker. They presented a solar facade that remedies these problems. “The photovoltaic elements integrated in this facade deliver up to 50 percent more solar energy than modules mounted perpendicularly on building walls,” says Sebastian Schindler, project manager at Fraunhofer CSP. “Plus the facade offers visual appeal.” The HTWK architects developed the idea and designs. How do the individual photovoltaic elements have to be tilted in order to capture as much solar irradiation as possible? How large should the modules be, and how many solar cells should they ideally include? The team’s findings were presented in a 2x3 meter demonstrator made of aluminum composite panels featuring a total of nine embedded solar modules. The Fraunhofer experts offered their experience, advice and assistance, and the photovoltaic elements used in the demonstrator likewise came from Fraunhofer CSP.

In collaboration with HTWK Leipzig and TU Dresden, the Fraunhofer CSP researchers also developed suitable options for integrating photovoltaic elements in concrete facades – more specifically in facades made of carbon concrete, a material developed by a consortium of more than 150 partners in the “C3 – Carbon Concrete Composite” project. The required stability of the concrete comes from carbon fibers rather than steel wires. “At Fraunhofer CSP, we analyzed how photovoltaic elements can best be mounted on these kinds of carbon concrete facades – that is, how to obtain the optimum result when combining this novel concrete with the production of solar energy,” explains Schindler. To this end, the researchers devised three different concepts and methods for integrating the PV elements in facade sections. The solar modules can either be included directly when casting the concrete sections or be laminated on or bonded to the concrete slabs. The modules can also be attached to the concrete slabs using stud fasteners, screw connections or other means, facilitating easy removal for maintenance or repairs. “We were able to demonstrate that all three mounting options are technically feasible,” says Schindler.

One of the main challenges is ensuring that the method used to produce the concrete sections is compatible with the required dimensional accuracy of the PV modules. This is done, for instance, by casting the concrete parts with a depression that is perfectly sized to accommodate a module. In this way, the desired orientation with respect to solar irradiation and the overall design are preserved. “The dimensional accuracy should be implemented directly in the concrete section,” says Schindler. It must also be ensured that the PV modules aren’t fastened where the concrete is particularly thin or where the carbon fibers are located, as this would impair the strength of the facade elements. The project has since been successfully completed.

In the SOLARcon follow-up project – likewise in collaboration with HTWK Leipzig and TU Dresden, as well as two corporate partners, and launched in November 2019 – the Fraunhofer experts are now establishing marketable solutions for integrating PV modules into precast concrete slabs. Will the solar cell mounting hold permanently? To answer this question, the Fraunhofer researchers are conducting appropriate endurance tests on both the PV components and the interface with the concrete. How does the interface behave under various weather conditions? What do accelerated aging tests show? In addition to the experiment-based approach, simulations are also on the agenda – more specifically, finite element methods. These allow the experts to calculate, for example, how the concrete and the attachment point of the PV element heat up at high temperatures, or what wind and pressure loads the solar module must withstand. 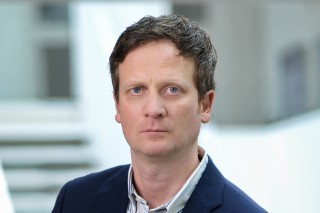